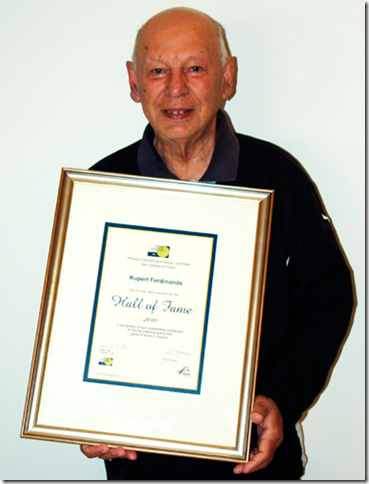 A blazing tennis star  Rupert Ferdinands— well known product of St. Thomas’ College, Mt. Lavinia and former Head Prefect of the School, a B.Sc. (Hons) graduate, Sri Lanka Davis Cup player and Australian qualified tennis coach (Level 3). Rupert first won the Sri Lanka National Junior Under 16 Singles Title as a 12 year old, and continued to win the title till 15 years old when he won the National Junior Under 19 Singles title whilst still eligible to play in the U16s, and dominated the U19 title for the next 4 years.

He was selected in Ceylon’s first ever Davis Cup team as a 16 year old school boy, and thereafter played in almost every Davis Cup tie for Ceylon until migration to Australia in 1972. Ranked No. 1 in Ceylon in 1957, Rupert continued to be ranked No. 1 for over a decade. In 1957, 1963, 1969 and 1970, he won the Ceylon National Singles title, also winning 4 National Mens Double and 5 National Mixed Doubles titles! In 1957 and 1970, he won the National Triple Crown title at one and the same tournament. Notable wins in his career were against Japan’s No. 3, India’s A and Amritharaj and Premjit Lal, and also England’s Michael Davies as a junior of the same age and who subsequently became England’s No. 1 player, Davis Cup player and ITF stalwart. Had match point against Canada’s No. 1 player Don Fontana, and set point against India’s Ramanathan Krishnan and Ham Richardson who was ranked within the top 5 players in America at the time.

On arrival in Australia in 1972, Rupert served as a apprentice tennis coach, and a year later he had no difficulty at all in qualifying as a Level 2 coach in 1973, and subsequently being accredited as a Level 3 coach. In 1975, Rupert was awarded the

General Coaches Education Certificate by the Department of Youth, Sport and Education of Victoria, Australia. Rupert was a Member of the Tennis Coaches

Victoria (TCAV) Board of Management for over 15 years. During this time, he acted as Secretary of the TCAV during the temporary absence of the Secretary and was also its Vice President at one time. He was invited to speak at National Tennis Coaches Seminars in Australia, and wrote several articles on various aspects of coaching that appeared in Australia’s TENNIS Magazine from 1985-1989.

In 1989, Rupert was appointed to a 5-man National Technical Committee for standardizing stroke techniques for teaching purposes for tennis coaches around Australia under the guidance of the National Director of Coaching. In the 1990s, he was sponsored by the Australian Government and the International Tennis Federation (ITF) on two separate occasions to proceed to Sri Lanka and conduct training courses for tennis coaches based on the Australian system.

Rupert’s greatest contribution to the TCAV was undoubtedly his dedication to managing the TCAV Training School for tennis Coaches for over 15 years as Manager and Chairman of its Examination Panel. During this time, his Training School committee introduced several improvements that led to high standards in the teaching of theory and practical components. This, of course, was in addition to his normal 9-5 daytime job as Projects Manager at Standards Australia specialising in the medical and dental areas, and his own private coaching at several local clubs. Time for family life was always at a premium!

In 2008, Rupert was honoured as a National Sporting Hero of Sri Lanka by the Ministry of Sports, Sri Lanka for his achievements in tennis both in Sri Lanka and abroad. On 28th November 2010, because of his pro-active attitude and programs over the years, enthusiasm and dedication to the tennis coaching profession, genuine hard work, a lifetime contribution to the game of tennis, and been instrumental in the success of many young tennis players and coaches in Victoria, Rupert was inducted into the Hall Of Fame of the Tennis Coaches – Victoria at an Awards Night held at Kooyong Lawn Tennis Club. A very prestigious award and a rare honour indeed!

Rupert spends his retirement in Rowville, Melbourne, with his wife Tammy (nee Wambeek) in a spacious home with its own flood lit tennis court, where he still does a little coaching. The sport truly runs in his veins and life would not be the same for him if he did not play a game or two every day!