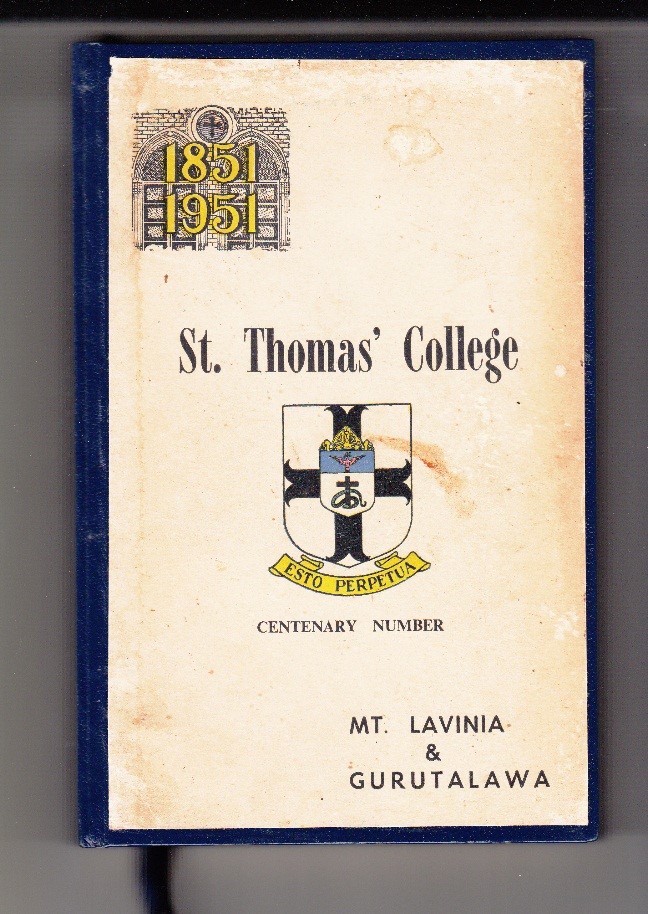 We put out this Magazine to mark our Centenary in the hope that it will prove of interest to Old Boys and friends of the School, an inspiration and encouragement to the present and future generations of Thomians, and a record which a historian of the School in the years to come may find useful.

The History of the College, written by Mr. W. T. Keble, carries us down to 1932. Seventeen eventful years have passed since then. We have not attempted in this magazine to write a formal history of those years but only to provide some material which a future historian could use. For more detailed information we would have to go to the College Magazines and draw on the recollections of contemporaries.

In 1901 we were fifty years old and a Jubilee Number of the Magazine appeared in that year. Several articles in this Magazine are produced from that.

We have to thank those who have written articles for us and for many who helped in various ways, especially Mr. L. E. Blaze. Mr. L. A. Arndt did us great service by searching our old records and drawing with such discrimination in “Memory’s Store”. Mr. H. A. J. Hulugalle thought out for us the form this publication should take; Mr. H. B. W. Abeynaike carried on the good work begun by him when Mr. Hulugalle went abroad. Mr. S. J. K. Crowther has done the final editing for us. At every turn we were helped by reference to Mr. Keble’s history. Most of our illustrations are taken from it. Lastly our thanks are due to Lake House, our printers, for all the assistance they have given us.

MUTWAL IN THE EARLY DAYS

Mutwal was then the fashionable quarter of Colombo; the trend to the Cinnamon Gardens had hardly begun. The Civil Hospital had been built there so as to be in the country air! One house, Fairly Hall, adorned the east end of Ward Place; at its extremity where it joins Regent Street was a tiny cottage, Mango Lodge, the Dutch Governor’s hunting lodge. There was another cottage at the corner between Maitland Crescent and Gregory Road. That was all. The Dutch preferred the cabook and gravel hillocks of North Colombo, and many British Officials and merchant princes had the same preference. By Lorenz’s time well-to-do Sinhalese, Tamils and Burghers had drifted to Mutwal. Ancestral homes on Small Pass and Wolfendhal were still apparently full, but already there were gaps. Canon Dias was in Mutwal, the Obeyesekeres were there as well as in Silversmith Street.        Sir Muttu Coomaraswamy occupied what old people still speak of as Coomaraswamy watte and was indeed known as Coomaraswamy’s Garden by all Thomians of Mutwal days; the de Sarams and the Greniers had been settlers for years in Mutwal; the Driebergs had been there so long as to be an old family. Of merchants the many were eclipsed by George Wall then at the height of the wave of coffee prosperity. He never forsook Mutwal, even in his later days, just as popular respect and esteem never forsook him.

One great feature of Mutwal in those days was S. Thomas’ College, which was held in high regard. I was often as a child taken to see the Cathedral Church, Christ Church, and the banyan trees, which stand to this day. I also remember being taken to be shown to Sir Muttu Coomaraswamy’s  mother, Sellatchi, a tough old lady who was very kind. She became ancestress of three clans of Jaffna Tamils in Colombo, clans which have had distinguished members. The future matriarch, when told I had in very early childhood come from Jaffna to Colombo in a boat or dhony, narrated how she, as a girl came from Jaffna to Colombo escorted by her male relatives and her future husband’s relatives, in a palanquin  and many retainers armed with guns and spears, cheered by drums and bugles during the 12 days’ journey. That was considered fast travelling in those days.

It was said that three Governors of Ceylon occasionally favoured with their company convivial smaller gatherings in Elie House, where Lorenz entertained sumptuously, and at Whist Bungalow, where Sir Rishard Morgan entertained as sumptuously. But Sir Richard Morgon did not have such a crowd as used to have access to Elie House. This necessary restriction by Sir Richard Morgan was misunderstood, and led to envy and malicious stories. As a lad I understood that Mutwal meant Lorenz, Coomaraswamy, Wall and Morgan in that order to my untutored mind, but I was not permitted to go to any of the great places and was taken to visit Sellatchi only at her bidding.

Mutwal had its charm in those days. The gardens of the houses were large, the streets not full of red dust as elsewhere in Colombo and the beach delightful—equal to the present day beaches at Bentota or Negombo. There was no harbor; only a roadstead where ships anchored two miles away in the open sea. It is curious to recall the fame of Mutwal and the ill repute of South Colombo; there was no Bambalapitiya then, only the Bembalapitiya kelle (wild jungle) of ill repute as the abode of thieves and highway robbers. The former residences of Dutch Governors and of former Dutch and British high officials at Mutwal, the Cathedral Church and S. Thomas’ College would be pointed out during rambles with great pride.